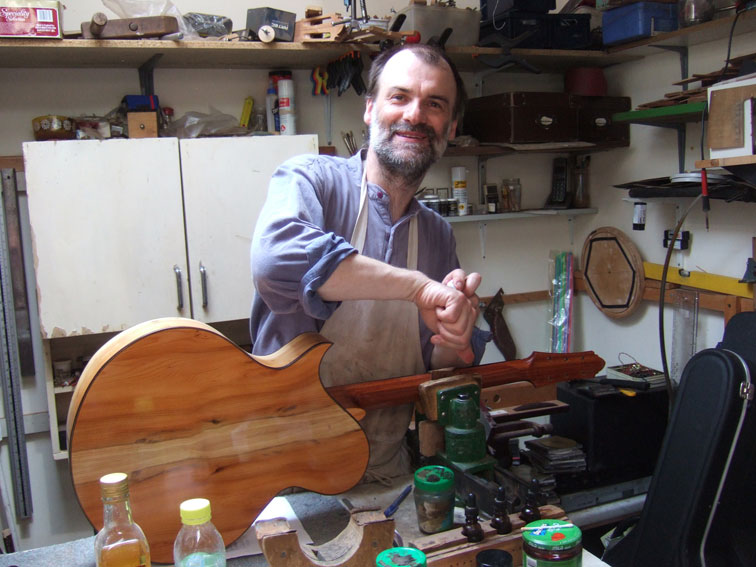 Newark stands on the River Trent in Nottinghamshire, a medieval market town steeped in history. The town’s tradition for making wooden musical instruments continues to thrive at Newark College where students are taught by some of the UK’s finest luthiers, including Adrian Lucas.

“They’ve been running instrument courses at Newark College for 43 years”, says Adrian, “starting with generic courses where you learn a bit of everything. Separate courses for the likes of violin and woodwind were soon launched after that. Guitar courses were a bit of a late comer, having only been established over the last 20 or so years, where I’ve been teaching since 2008.  I’m one of three professional guitar luthiers who teach one day a week, as I’m full time in my own workshop making my own A.J.Lucas Guitars. Both duties complement each other quite nicely and, as guitar making is quite a solitary occupation, it’s nice to get out at least one day a week.  The college workshop is also a melting pot of ideas and it’s nice to talk guitars. I’m teaching on the acoustic guitar course where the student has a choice to build a steel string acoustic based on Martin OO or a nylon strung based on a Torres design for their first guitar.  Both are made from a plan using tonewood that we provide.  We use European spruce for the tops, walnut for the back and sides, sapele for the steel strung guitar necks, cedar for the nylon strung and a choice of ebony or rosewood for the bridges and fingerboards.

We’re also following the traditional Spanish heel construction where the neck is integral to the body, and the sides go in slots within the neck, rather than the neck being a separate item and attached to the body at the end of the process.  We also use this design for both steel and nylon strung guitars, it gives a nice structural integrity to the instrument.

There’s a great community of instrument makers here in Newark from all over the world who kind of stick together. There are plenty of shared rental houses with in-house workshops in them, and at the end of the year when the students leave, they pass on their rooms to other instrument makers.  We’ve had students of all ages, from 18 up to 70 and not just from the UK, also France, Spain and Canada.

The skill level of the students does vary of course, but there is a need for students to have the basic manual skills, if not, we may recommend they complete a years cabinet making course to at least have an idea of wood working.  On the other hand we have had students without any wood working experience and they’ve done very well, but that’s not always the case.”

Do you divide the students into teams depending on their skill levels?

“No not really, there’s never really a problem with anyone making the minimum requirement of one model in the first year, I have had exceptionally skilled students who have made up to 5 during that time.  We also have metal workshops where a high level of engineering is used to make specialist tools like purfling and circle cutters and soundboard thickness gauges. The fact that all three of us that teach at Newark are also working as guitars makers, means we bring some of the reality of running a business to the course, rather than this is just how you make a guitar.  Quite a bit of the teaching is on a one to one basis, six students per class is comfortable so we can talk individually as we go through the building process.  They all work at a different pace and even though they are on the same project, they can be at different stages individually.  As long as the slowest person obtains the minimum in a year, then it doesn’t matter if the faster workers go sailing ahead.

When you look at a finished guitar it looks a really complicated project, but when you break it all down into small steps, which is part of my job, you realise that none are really beyond most people’s abilities.  I think part of the skill is having an understanding of the instrument and how it all works together.

We don’t encourage machines because if they can learn the hand skills, they’ll always have that to fall back on.  There’s quite a lot of donkey work required in taking 3 millimetres off the back of the soundboard to meet the required thickness using hand tools.  That’s quite straight forward, whereas cutting fret slots, fitting bindings and making rosettes must be very precise.  We teach French polishing as well as we can’t meet the health and safety rules and regulations for a spray booth here, but a thin polished finish helps the guitar to breathe.  I use French polish finish on my own instruments as well.”

Adrian is no stranger himself as a student luthier.  In 1990 he began building acoustic guitars in the traditional Spanish style under the tutelage of Roy Courtnall.  Eager to use his finest chisels on his own ideas, he soon set up his own workshop and founded AJ.Lucas Guitars, now recognised as one of the best names in hand built acoustic guitars. “I’m focusing more on steel strung acoustics and classical guitars, producing 10 or 12 a year,” Adrian explains.  “In the steel string range I have three models which equate to three different body sizes, the Pavilion which is akin to a small jumbo bodied acoustic, the medium size Arbour and the small bodied Pergola.  The Radial, from my Classical Series, is based on a design where the bridge is installed in the middle of a circle, so as the lower bout is circular, the bridge is in the middle of that circle and driving the soundboard from the centre of that circle, rather like a speaker.  I’m also using the same design on the steel strung Pergola.  I still try and maintain that roundedness to the lower bout just because I think that sonically, as a diaphragm, it works better than having corners.  If you look at a Martin Dreadnought, it’s almost like a rectangular shape.

I use a lot of reclaimed wood for my A.J. Lucas models and I have quite a large stock of very old, air-dried mahogany some of which is probably over a hundred years old and very stable, it’s better quality than you can buy these days.  I’ve also saved old doors made from Douglass fir which is ideal for bracing.  I’m also fond of working with cherry and yew, holly as well.  I’ve just finished an all mahogany guitar with a holly bridge, it’s almost white and looks very interesting on a dark soundboard.”

With the state of the depletion of rainforest woods and the Cites regulations in particular, more and more guitar builders are leaning towards working locally sourced woods.

“I think in the future, this is certainly the direction we’ll have to take,” says Adrian.  “The guitar department at Newark College have just finished the Leonardo Research Project, which was a three year development that also involved a luthiery school in Finland and Belgium and four individual luthiers from France, Spain, Ireland and Italy.  The idea was to get students to build matching guitars, one in tropical wood and one in non-tropical wood and when complete, listeners would take a blindfold test to determine a preference within the sound of the tonewoods used.

We collected a lot of data over the three years and the results came out an even 50/50, there was no preference between the tropical or non-tropical woods.  But when the listeners and players removed the blindfolds, it swung 70% in favour for the tropical woods, so it tells you about the psychology of the issue.

I’m also heavily involved with The Holy Grail Guitar Show held in Berlin where I exhibit my own guitars.  It’s organised by the EGB (European Guitar Builders) of which I am a board member.  At the last show, we had a project called The Local Wood Challenge which promotes the use of local woods for guitar building.  It sparked an interest in guitar making with woods that you may not have previously considered.  Bill Quinn at Tonetech, is very aware of the problem and has a large quantity of quality local woods as well as being a big supporter of the Holy Grail Show.

We allow the students at Newark to choose their own woods, but only in their second year after they’ve built their first guitar, then they’re better equipped to make decisions within the build, rather than try and design and choose woods without any frame of reference.  In the first year, they get to know the anatomy of the instrument using fairly traditional materials.  That first guitar is a huge learning curve and at the end you start to understand literally, how it all fits together. There are a lot of emotions running when a finished guitar gets strung up in the workshop and everyone gathers around to have a listen and play.  We organise a student concert with all the finished guitars and also a diploma show which includes all the course instruments, woodwind, guitar, piano and violin, followed by a professional quartet that will play the students instruments.

The college also invites a professional steel string and classical guitarist to come and play the finished guitars and pass comments to the students.  That’s a great affirmation for the students seeing the guitars they have built being played by great players, the look on their faces says…….‘this is what it’s all about’.

It’s a great celebration of music.”