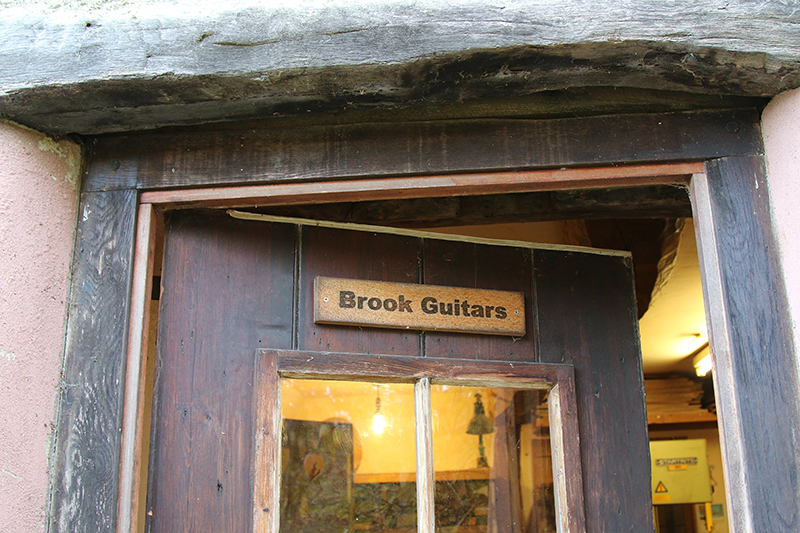 Brook Guitars are nestled in Easterbrook, in deepest mid Devon….that’s no exaggeration.

Luckily, I had Nursey with me to read an old fashioned paper map, as the Sat Nav gave up way back. Her skills also involved guiding the car across a rickety, but stable log bridge, a bridge in the same class of construction as seen on Top Gear Specials when Clarkson, May and Hammond get daft instructions to construct a log raft to take a car across a raging river.

To be fair it wasn’t a river, a brook in fact, from whence the name of one of the UK’s finest builders of acoustic guitars derives, and who aptly name their models after Devon and Somerset rivers. With the grass in the centre of the track now almost as high as the bonnet, a large pink cottage looms into view surrounded by apple trees and dense woodland known as Nymph Woods.

“Ah yes, the Nymphs, supposedly beautiful mythological maidens that inhabit these woods, I have a net but I haven’t caught one yet”, laughs Simon Smidmore, who, along with Andy Petherick launched Brook Guitars back in the mid 90’s. “This is a wonderful place to relax and build guitars, just the odd deer passing the window now and again. It can be a struggle to get here in the winter sometimes, there’s no access for a gritter lorry for miles, but we battle through.”

It’s a dark, damp November afternoon and lights through the tiny windows look the part, but no log fires within, just the gentle whirring of a large linisher belt sander, the smooth scraping of wood planes and a little hand sanding action now and again. The action is full on, whilst at the same time less speed and more haste is the theme. “If we wanted to make a lot of guitars within a certain time scale we would have to look at CNC machines and modern technology”, says Simon, “But we are not in a hurry, time is not of the essence here at Brook Guitars. We would never look to speed the process up if it took away any form of quality within the construction, playability or tone. We are really intent on keeping our guitars as handmade instruments, having control of every portion of the build.

Andy’s engineering background has helped build jigs and fixtures adapted from all sort of motors, he’s made a router which makes things a bit easier, and you’ve seen the large linisher belt sander downstairs which they’ve adapted over the years, it was actually built by Andy Manson, but that’s about it, electric tools are scarce here. “I’m always hunting for old chisels at boot sales and outdoor markets, the old ones were built with the best quality steel, I have hundreds but just two favourites that I use all the time.”

With a worldwide reputation for these extreme high quality fretted acoustic instruments, customers from around the world are also educated about local rivers.

“I’m no expert on rivers,” says Simon, “The idea was so well received when we first started out that we just kept the river theme running and the names just roll off the tongue so easily, like the Taw, Torridge, Tamar and Bovey, there’s quite a selection now. Our Little Silver travel guitar for example is named after a small stream in Devon and the tiny Brook Kit Mini is akin to the pocket sized fiddles that the dance masters travelled with as far back as the 1700s. Our most popular acoustic guitars are the OM size Taw and the OO size Torridge which, like most of our models, are designed for delicate fingerpicking. We can of course cater for all styles, the large bodied Okement Super Jumbo will also sound sweet as a fingerpicker but excels with its big projection and full sound as a strummer. Whilst we have models to suit a variety of styles, we like to spend time with a customer rather than just making a guitar they might like after spending time with one here in a quiet corner. If they want an electro-acoustic they might have an idea of what pickup system they would prefer, but we would need to get to the nitty gritty of their requirements and their playing styles, something they may not think about. Our designs are proven and dyed in the wool but we will of course work with the customer and build to their specifications, but it’s a little more in depth than that. We’ll change specs if we have to, even though it might be a move we may not have undertaken ourselves. We keep a strict eye on that and tell the customer if it doesn’t fit in with Brook designs. You could say we are interviewing them to dig out the fine points that will make them feel they have everything they ever wanted in a hand built acoustic guitar that’s personal to them.

If they are a delicate fingerpicker we’ll lightly brace the top, or if they are more of a strummer we might add strength there. We recently had to double brace a top for extra stability for a Brook owner who is continually gigging around the world experiencing fluctuating temperatures. I don’t mind pursuing a slight diverse request if I feel the player with benefit. We built a special for TV Smith who was in a punk band called The Adverts in the late 70’s, he’s still playing well over 250 shows a year and continually flying. He had an altercation with an airline, well you know what I’m going to say, they snapped the neck. So he asked for a Brook acoustic with a bolt-on neck which was designed to be easily removed when he was flying.”

A lot of players are keen to tackle minor repairs themselves, whilst some of the more serious like a detached headstock, are best left to the experts, a subject that’s a labour of love for Brook Guitars. “We handle a lot of repairs for both acoustic and electric guitars. I can say hand on heart, we get a snapped headstock repair once a month at least, usually a Gibson. It is a very time consuming part of the business, we get a lot work that other repairers won’t take on. It’s in our blood though and we feel it’s important to keep the really old classic guitars alive. We’ve had electric guitars in where players have tried to handle the repair themselves, covered in Araldite with steel rods and pins inserted here and there.”

Luthiers are getting more and more concerned about the protection and dwindling availability of exotic tonewoods, Brook are always searching for useable local timbers. Simon continues,

“We have used some unusual woods including American red gum, but I’ve always wanted to build guitars from local English woods, rather than timber than has travelled half way around the world to get here. This is something we have managed to maintain at Brook Guitars. We were the first to work with 3,000 year old English bog oak which we used for the fingerboard, bridge and headstock of an early Taw.

We have connections with farms and saw mills who will give us a call if they think they have something special, we have local cherry, sycamore and walnut from Devon and there’s something about having a Brook acoustic guitar named after a Devon river, constructed from wood from the same county.

Most of the time the trees have fallen naturally, we’ll cut it into planks and wax the ends to stop it splitting and leave in the drying room for at least 18 months before we work it. I’ve always got my eye open for reclaimed timbers, I managed to get hold of a load of big, thick mahogany doors from renovated council offices and old bank counters which gave us a big supply of mahogany. My son Jack does all the inlay work and Kev repairs necks and works in the spray room with Andy where we apply about ten coats of two-part lacquer, rubbing down in stages during the process for a thin flat, stable finish. Ebony is our favourite wood for headstock veneers and bridges as the close grain makes it easy to carve, it’s also the first choice for our fingerboards. There’s a big choice of tonewoods for the soundboards in the drying room, although Engelmann and European spruce are popular, if the customer is a strummer though, we would suggest a sitka top.

All our customers all over the world are happy with their guitars, and the fact that we give a free first set up and a lifetime guarantee is reassuring, we have some clients with over ten Brook acoustics.                                          It all works by reputation and word of mouth. I’d advise anyone who wants more information and a good read from our Babbling Brook newsletter, to simply click on the web site, because you won’t find us on Facebook, Twitter or Linkedin, we are too busy making fine acoustic guitars.”

To witness such beautiful acoustic guitars made in such tranquil surroundings had a calming effect on the drive here, seems I took the route for kayaks, “Follow my motorbike says Andy “I’ll get you back to tarmac.”