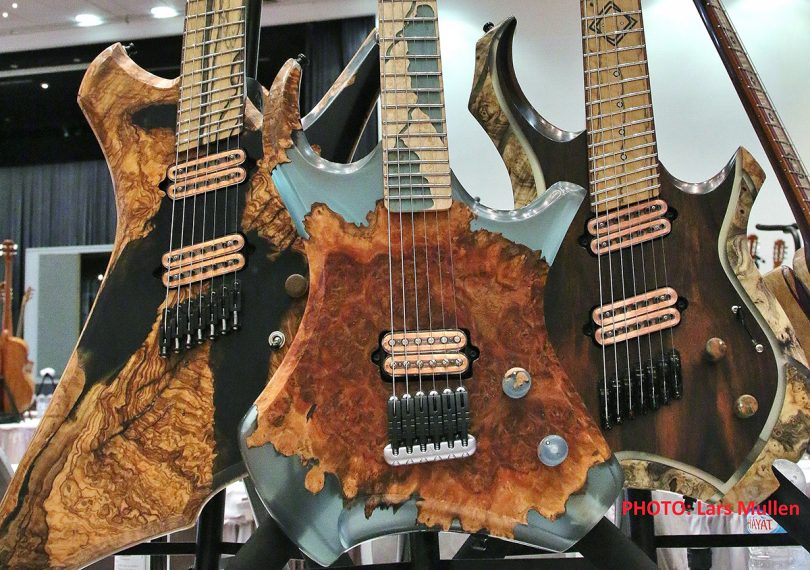 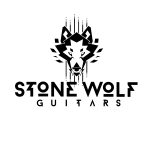 The UK’s Stone Wolf Guitars are built for speed with a heavy rock theme throughout, but it’s the resin and tonewood construction that’s fascinating players all over the world with their stunning, and totally original designs.

“They are original in the fact that no two models are the same” explains owner Mike Payne. “The full effect can be seen in The Faroe, one of six in our series where the bodies are built with resin, showcasing some of the finest tonewoods in their natural form. This guitar is a fine example where I’ve cast beautiful poison wood burls in clear blue resin which as the name implies, takes inspiration from islands, the ocean and arctic ice flows.

As we know a burl is the extraneous growth on a tree, and their colours and patterns become even richer as they age and the size doesn’t always predict the weight, some small burls are heavier than the larger ones. Some guitar players have commented that a resin guitar with a burl, is going to be so heavy, but they are thinking of the old acrylic, plexi-glass guitars from the 70’s that weighed one and a half metric tons”, he laughs. “It’s just not the case with resin, my guitars are no heavier than a regular solid bodied electric guitar.

I went down the resin road after using this material, to repair a few small voids in a book-matched top designated for a solid bodied electric. I stood back and thought of all the possibilities of not just a clear solid bodied resin guitar, but how it could also display some of the beautiful poison wood burls I had in stock that weren’t big enough to actually use as a full size body, but which could be captured in the resin forever.

The visual concept is quite unique as using resins in this way, offers virtually limitless customisation. I have a stock model that I’m working on now which is unusual to say the least. The back is swamp ash which has the grain dyed with fluorescent paint, pink into blue, whilst the resin top features a white, laminated cotton sheet with tie dye hippy colours with two resin channels.            It’s an 80’s disaster but I kinda like it, again it shows the incredible versatility of working with resin. 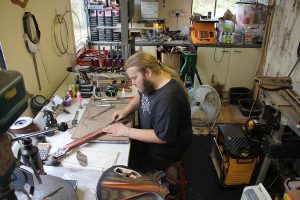 At the moment the resins are just for the bodies and fingerboards. We haven’t branched out into full resin necks yet but it’s on the cards for later down the line. I’m also in favour of mainly using bolt-on necks for my builds, I’m coming from a mechanics point of view and I find the practical benefits of a bolt-on outweigh the downsides. For me at least, they just make more sense.”

Chemistry was one of the few subjects I liked  back in my school days, I’m eager to know more about the resin process, I can see big pointy hats, cauldrons and big stirring sticks, do I have the correct picture?

“No,” says Mike. “When working with resin there are basically two main methods, casting and stabilisation. Casting, for us here at Stone Wolf Guitars, makes the most sense for purpose. Considering the equipment we have the space for, it’s by far the quickest and cost most effective method. It essentially means pouring the resin next to the wood and letting it bond to the surface of the wood and then shaping the body.

There’s a lot more involved with the stabilisation process, and it requires additional equipment, like pressure pots, ovens and vacuum chambers for example.”

So had you worked with resins and moulds before?

“No, not at all. I’d loved guitars from a very early age though, loved motorbikes as well, and was always taking things apart. It seemed a gift from above when I became a motorcycle mechanic whilst still heavily into guitar music. There was a dark side though as I had a history of kidney problems which was always knocking on the door, and when I was about 20 both kidneys failed.

So I had to give up the bikes and go on dialysis for two and a half years. I was very bored to say the least, but still had my guitar, an Ibanez RG1570. I listened to so much rock music through those years, especially Frank Zappa. I don’t know why, but after looking at the Ibanez, I suddenly had the urge to make my own guitar with a rock theme. I had to rest up, but I thought this will surely ease some of the boredom of sitting around taking it easy.

I bought a large piece of sapele, a big box of chisels and a book by Melvyn Hiscox titled How to Build An Electric Guitar. So I’m standing there, chisels in one hand book in the other, like it’s my first attempt at making dinner with a cookery book. Needless to say, the first couple of guitars were pretty diabolical. You learn from your mistakes, but the thing was, I adored the process and built six more that were actually playable, although not great by any stretch of the imagination.

I eventually had successful kidney transplants which allowed me to go back to the motorcycle garage. I joined a bike club where I met Martin Pape who now looks after the business side of Stone Wolf Guitars. I wasn’t happy at the bike garage so I went to work for Martin in a bio tech company. He was a music fan and he liked my guitars and encouraged me to work on them on my days off, he then persuaded me to set up Stone Wolf Guitars which I did and registered the company in 2013. There was a lot of experimenting with the resins until I had a formula that would successfully bond the resin and the glues with the wood, and our first production of resin guitars appeared in July 2016, and the recent introduction of the burl wood has taken the production to an entire new level. 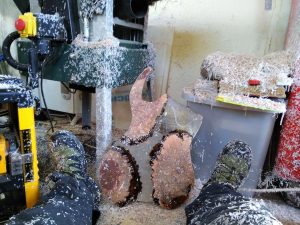 So in reality, Martin and I are the two man Stone Wolf team going flat out, he’s constantly under a pile of paperwork and I’m covered in resin the colour of the day, depending on what guitar I’m working on.”

Does it take long to construct a resin and wood guitar compared to a regular wood build?

“Yes, they take a lot longer. It’s nothing to do with casting the tonewoods in the resin, they all work fine, and the likes of the burls, English yew, purple heart, wenge, swamp ash, sapele and olive wood all look stunning set in the resin.

It’s the resin itself which doesn’t like bladed tools, so it’s all down to routing, working with hand tools and a lot of sanding.  At the moment we are going flat out with 7 stringed guitars. In general, the more strings you put on a guitar the more expensive it is to build. I feel there are enough people making the extended range of 8, 9 and 10 string guitars and I really don’t have much of a desire to make. I won’t say 7 is our limit by any means, but that’s where we are at the moment. The whole extended range of metal-themed guitars is huge now, much bigger than it used to be.

All the artists on our web site look very angry, it wasn’t on purpose.  I just seem to have fallen in with that crowd”, laughs Mike, “They are such genuine players. 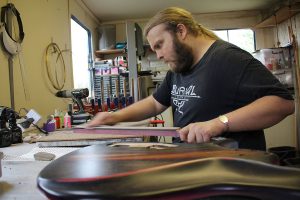 I’m keeping our designs with the metal theme with extravagant tonewoods highlighted with the bodies and the fingerboards, but without blatantly copying other guitar maker’s designs. The seven in our series include The Faroe, The Ikara (yet to be revealed), The Rift, The Catalyst, The Hammerhead, which has dark blue resin with some stunning samples of olivewood, The Nova and The Syrtis, which features our ‘resin channel’ body construction where the wings are separated from the central section by clear or coloured resin.

Saying that, I can build a totally custom resin or full wood guitar to the customer’s requirement, as we say, the imagination is the only limitation. We also offer aesthetics you can’t get from anywhere else.”

So, what better way to preserve my old catapult, keepsake Dinky toy car, my first 45 record I bought and my first milk tooth (still in a match box, thanks mum), to have them capsulated in my own custom guitar.

“Well, yes why not, we can do all sorts of customisation with resin.  My choice of hardware is also crucial for the visual concept and performance of Stone Wolf guitars and Schaller is right up there. I’m a fan of their Hannes bridge, with the graphite saddles. I would say 90% of my stock, including fretwire, carbon graphite rods and all my tools I get from Bill Quinn at Tone tech, delivery is first class  and there’s never a problem. I’m also using Oil City Pickups made by Ash Scott-Lockyer based in North London, the Black Wolf 6/7 units, as the name implies, were specifically designed for me. All the specs within output, dynamic response and tone are perfect for our guitars, and the visual concept maintains the resin theme where you can see the copper windings through the clear bobbins.”

What percentage of a Stone wolf guitar is resin and what is wood, and do you think this combination effects the tone and sustaining properties?

“In overall mass, in most of my guitars it’s about 30% resin and 70% wood. Wood of course has resonance and a different density to resin, but high output guitar players, especially if they’re going through several distortion pedals or modelling amps,  output and tone is designated by pickups, tuners, fretwire, pots, electronics, cables, all that that kind of stuff that’s triggering the sound. I think a lot of the tonewood concepts are often lost between the cable and the multi-effects unit.

I’d rather let customers listen to my guitars to make their own minds up. I’ve not had one back with any degradation. In May 2018 we exhibited at the Holy Grail Guitar Show in Berlin, the home of ‘who’s who’ in the world of guitar lutherie. I was delighted when so many players tried our Hammersmith model saying it was the best sustain they had ever heard.”