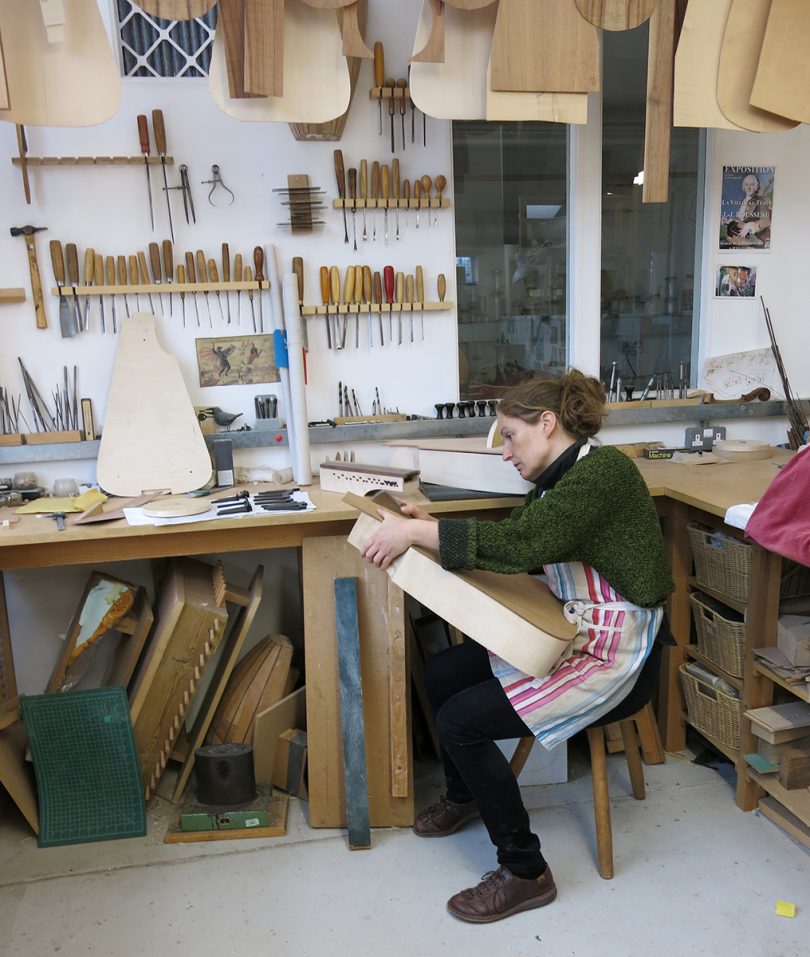 I’ve always been fascinated by the hurdy gurdy, its origins, and how on earth one plays such a complicated looking instrument? I was a toddler when I had my first hurdy gurdy experience. A black and white TV show in the late 50’s, there’s this fella with a long beard, smoking a pipe and cranking a handle like crazy, on what I now know is the only musical instrument that uses a crank to turn a wheel, to rub strings like the bow of a violin, to produce music.

Claire Dugué is a French luthier based in the UK, one of only a handful of highly skilled hurdy gurdy makers in the world. I talk to Claire about the origins of the instrument, its popularity and how the construction and playing styles have changes over the decades.

“The whole hurdy gurdy movement has moved on so quickly over the last few years,” says Claire. “Whilst often regarded as an acoustic instrument for folk music, its distinct and unique sound can be heard in a wide range of musical genres throughout pop culture, jazz, rock, blues and experimental music. The scene here in Britain I would say is healthy, whilst in countries like Germany, France, Scandinavia and Spain it’s booming.

The originals actually date back to the 9th Century, when a bowed instrument similar in design, called an organistrum was used in churches across Europe to train pupils to learn music.

It was a rather large instrument played by two people, one would operate the wheel, whilst the other would pull the keys. It was of course quite primitive compared to a modern hurdy gurdy, this was a big, deep bodied instrument with a maximum of 3 strings. There are several ancient stone carvings of musicians with these instruments, a famous one above the porch of Santiago de Compostela cathedral in Galicia.

The whole concept of how the modern player approaches and plays the hurdy gurdy along with the build and construction, has also changed so much over the last 30 years. In fact, it’s changing all the time. More and more players are using the wheel like a bowed instrument, introducing staccato and vibrato for example, rather than a continuous rotating rhythm approach.” 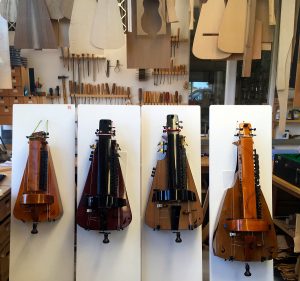 Is there an advantage to have previously played a bowed instrument before learning the hurdy gurdy?

“Like any instrument, you have to put in the hours, and of course it’s always an advantage to have played an instrument before starting on a new one. The hurdy gurdy is very mechanical, apart from learning how to play it, there are lots of moving parts that you have to be familiar with to get the best results. It’s not an instrument that’s readily available, so that may deter people to some extent, it’s certainly not massed produced. If you want one, you have to wait quite a while. There’s also a lot of technical know-how required in the set up, it’s not just a case of taking it out of the box and it’s ready to go.

During the 70’s and 80’s there were some inferior models available that gave the hurdy gurdy a bad name, they didn’t perform or sound that good and tuning was unstable. They are more reliable these days, and I’ve worked hard to achieve this with my models.

A quality instrument that’s been set up perfectly should sound wonderful, like the violin, viola or cello, but this can take many months, even years to ‘master’ setting up. There are many things to consider and learn, like how much pressure is applied to the strings on the wheel, how much resin is applied to the wheel itself and how much cotton wool to put around the strings where they touch the wheel so they don’t get damaged, this all takes practice. These are all aspects of learning about hurdy gurdys, it’s about familiarity with the instrument. However, by the time the player is at gigging level they will have had the ‘hands-on’ experience.”

How and when did you decide that you wanted to make hurdy gurdys?

“I played a lot of Flamenco music at home in Normandy, France and originally wanted to learn how to build Flamenco guitars. I couldn’t find a place in Spain, so I applied for a position at the London College of Furniture in 1994. I was accepted for a 5 years course, but there were no spaces left in the guitar workshop, so I was put in the ‘early fretted’ section where I made lutes and acoustic guitars for 3 years.

It was during this time that I discovered the hurdy gurdy. I decided this was the instrument I wanted to make, but there was no one there who could teach me. I taught myself a lot, but I did get help from the engineering departments. Apart from intricate woodworking, there’s also lots of hardware and metal turning involved.

I set up my own workshop here in Ramsgate, Kent in 2001, making a lot of my own acoustic instruments based on 19th century French hurdy-gurdies with bowl backs and carved headstocks. I enjoyed this period, but I wanted a change so I finished the waiting list and concentrated on making hurdy gurdys based on my own designs about 5 years ago. My own instruments have nothing to do with the traditional hurdy gurdy on the inside or the outside. I’ve changed everything and they are built to my own specifications, to create a better deeper, warmer and versatile sound.

I’ve concentrated a lot on the main vibrating area of the soundboard which is underneath the wheel and has to be quite wide for the full effect, as a result, I’ve developed my own body shape throughout the range. I’ve made hurdy gurdys in a baroque style before with an acoustic guitar body, but the top bout isn’t really needed, so my designs are nothing like the original concepts of the early hurly gurdys. Whilst 19th century style models are still being made, many luthiers like myself have moved on.

I am currently concentrating on four models, a starter Soprano instrument called ‘Premier Pas Libre’ which means ‘first step’, then I have the ‘Do-Libre’  a bigger Soprano offering a much deeper warmer sound.  Then I have the Alto ‘Exo-Skeleton’ which has the ‘highs’ of the Soprano, but with a slightly longer scale length. Fitted with viola or cello strings, this Alto will play an octave lower than the Soprano offering more versatility and players can have 3 or 4 melody strings and a choice of drone strings. 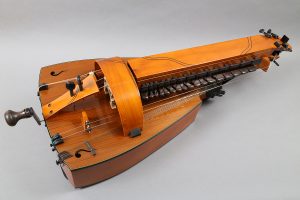 I also developed my Tenor ‘Carapace’ model recently, which can go even lower by an octave tuned to a low C and fitted with cello strings. This hurdy gurdy also is extremely vibrant, I’ve changed the design of the acoustic chamber inside so it resonates more, with a pumping effect like a cello or violin. I’ve also designed a wooden frame which fits on the back (photo shown on the back of the ‘Do-Libre’), so the body is not in direct physical contact with the player. The difference is very apparent, there’s more warmth and volume and it also allows the back to vibrate freely. In a way, we are being pushed by the players and anything seems to be possible now. 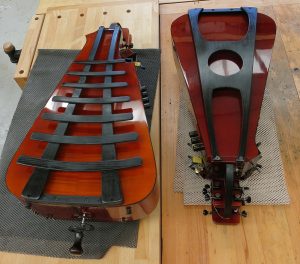 Do Libre Back Frame

Whilst my hurdy gurdys are primarily acoustic and are quite loud, I also offer the option to have pickups installed. I developed a system with an electronics engineer from Austria called Alexander Seidler which utilises microphone capsules, one for the melody strings and one for each sets of drone strings.”

The tool chest in Claire’s well lit, dusty workshop contains many hand implements familiar to guitar luthiers, and, like flat top guitars…it’s all about the wood. 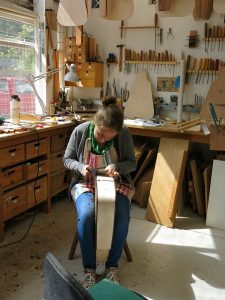 Claire in her tidy workshop

“I use spruce and western red cedar a lot for the soundboards and maple or walnut for the back and sides, or even cherry,” says Claire. “The tenor model is actually made of poplar which has a great sound, it is also nice to work with. I use hand tools very similar to guitar luthiers and violin makers like peg shapers for example, along with planes, chisels, knives and circular saws.

There are over 200 parts in a hurdy gurdy and around 90 are moving parts and at first, I was making models from scratch one at a time, but it’s far too time consuming. I now plan my year and make all the parts in series, all the keys and keyboards together for example. I used to make all the metal parts like the axles and handles which also took up a lot of time, so now I work with an extremely good engineer who can make all the metal parts a lot quicker. In a year I can produce up to 15 models.

I’ve made instruments for many great players in the hurdy gurdy world, and well respected acoustic guitar players like Richard Thompson. It’s heard in so many genres of music now. Nigel Eaton played his with Jimmy Page and Robert Plant. I’ve also recently sold my models to screen writers who have penned tracks for up and coming TV and film scores.”

Your order book is always full and looking healthy, how do you managed when the pressure is on?

“I’m here working all hours by myself. There are times when I think I really should employ someone, but it would take up so much time to train them. If I’m very busy I can call on my husband Kai Toenjes who is a highly skilful guitar and mandolin maker.

As I’m typing up our interview, I have YouTube running through so many hurdy gurdy players (known as a gurdyst); for me, it’s the drone strings that deliver their pitch accompaniment to the melody, I find this rather haunting and also identifiable within the world of sitars and bagpipes, the latter of which is often present at the shows where Claire exhibits her models.

“The biggest show I attend is the International gathering of hurdy gurdy and bagpipe makers held each year in France in mid July. This is a very important show for me as all the top players will be there and also all the makers from around the world, which in numbers is surprisingly low, I believe there are only about 35 of us. It’s also a great opportunity for luthiers to exchange ideas and keep up to date with the whole concept of the hurdy gurdy. I’ve also attended various folk festivals and the Early Music Festival in London which was very successful for me. It’s good to attend the shows but in all honesty, I have enough work that I don’t have to regularly exhibit.