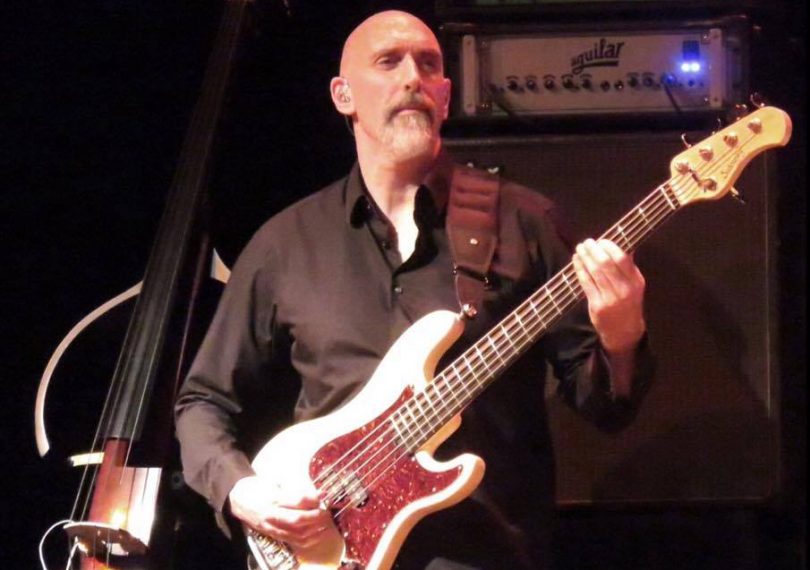 Having interviewed UK bassist Dave Swift in the past, I was pretty confident our interview would flow along nicely within the questions and the content. Like most players, their CV is of the utmost importance, who they have worked and recorded with, being one of the major contributions. I was aware that having the role as bassist in Jools Holland’s Rhythm and Blues Orchestra for over 25 years, had seen Dave perform with some of the greats. Less than quarter way through compiling a list, I just gave up. It’s easier to ask who he hasn’t played with.

“That’s a good question to start with,” laughs Dave,

“Many people have likened me to Will Lee for his work as bass player in the house band for The David Letterman Show in the USA. I’ve been in a similar position here in the UK as the bassist in Jools Holland’s Rhythm and Blues orchestra and on his BBC Radio 2 program since 1991 and of course, his Later With Jools Holland’s BBC TV show.

I’ve lost count of how many high-profile artists and bands I’ve worked with who have appeared on these shows over the years, it runs into the hundreds covering all styles of music, from Adele to Buddy Guy.

The biggest difference of course is that The David Letterman show is more chat than music, the opposite to ‘Later with Jools’. I have a big list on my new website, but people don’t seem to look at websites these days and I have to explain it all on social media sites.”

Personally, I’ve always felt that I had at least one good ear (I don’t mean I’m half deaf) for a song, being able to find the pitch and learn the guitar and vocal parts in what I thought was a pretty quick time…quick quick slow, compared to Dave, as he explains.

“It can be taxing, very often on ‘Later With Jools Holland’ the band often won’t know who we’ll be playing with until a couple of days beforehand, and very often not knowing what the song is going to be until the same day.

Amy Winehouse for example, we all had to learn it whilst she was watching us, and when I heard I was going to be playing the lead line on the double bass for Paul Simon, I almost couldn’t breathe. I’ve always loved Simon and Garfunkel albums especially when I was much younger and Paul is such a nice guy. Because I’m tall, I’m normally put at the back of the room in the TV studio, but when we played  his track called ‘Wrist band’, I was situated right at the front as this song is almost a duet between his voice and the bass line. We ran through the songs before we recorded the show and he changed it around each time, so we ended up busking it. He was interested in my double bass as his father was a player and he had his original in his office.

I do have quite a big bass guitar collection, over 80 at the last count,” he says peering through his fingers, “But I’ve only owned about 5 double basses over the years, I’ve had the one I played with Paul Simon for about 5 years made by Roger Dawson. I just think he’s one of the finest luthiers in the double bass world, he’s making me a second one which I’m excited about, I mean…you have to have two…don’t you?

I’m still breaking in this current model, like many large stringed instruments and acoustic guitars, the more you play it the better it sounds. I did hear that there’s a product out there that actually ‘aged’ the instruments in this field by blasting it with soundwaves from speakers.  Well, thanks to Metallica I probably don’t need any help in that direction!” Dave laughs as he explains,

“Metallica were on ‘Later With Jools Holland’ a while ago and I had just played with Jools and Aaron Neville from the Neville brothers and they were next to us waiting their turn. Regulars of the program will know, that the show format often follows with the next band starting without any introduction. I knew it was going to be loud, but I feared for the life of my double bass. It shook so vigorously, I was hugging it in fear of it exploding. I felt I should thank the band for breaking it in, I think they must have aged it sonically by about 10 years in just 10 minutes.

I didn’t know at the time but Kirk Hammett from the band, is also a huge sci-fi fan, we‘ve talked a lot on the subject since and I’ve been to his sci-fi horror convention in San Francisco California with Boris Karloff’s daughter Sara. I also talked ‘all things bass’ with Robert Trujillo the band’s bassist, he’s made a film simply called Jaco all about the rise and fall of Jaco Pastorius. Robert has his original ‘bass-of-doom’, or what’s left of it, as it’s been repaired so many times.”

“Yes that’s perfectly true. My two older brothers both played guitar and were brought up on all the classic rock bands like Mott the Hoople and Hendrix which, as a snotty nosed 14 year old kid was all beyond me as I was learning to play the trombone. But at 15, I decided to teach myself bass guitar and the double bass at 16. They must be so mad now though, as their younger brother is playing with all their guitar heroes and bands which they idolised including Cream.  There I was on TV playing with Eric Clapton, Jack Bruce and arguably some of the finest, most iconic guitar players who ever lived including Joe Bonamassa, Jeff Beck and David Gilmour, at one time I actually played with three of the surviving Beatles, Paul, George and Ringo.

I’d been playing for ten years when I first got the Jools gig back in ‘91 and hadn’t really played with anyone famous, so it was a real shock to the system when I got a call asking me to play with Eric Clapton and BB King. I hadn’t really worked on a TV show before and I certainly never worked with artists or bands of that calibre, but I realised early on that this is what was expected of me as part of the house band’s rhythm section. Sometimes I have to keep my emotions under control, I’m still on cloud 9 even aged 53,” he laughs, “On the New Year’s Eve Hootenanny show for instance, I can play with more high profile artists and bands in that one program than most musicians in their lifetime.”

So in reality, it’s like playing with a new band each time and, as it’s being televised there’s no room for errors.

“No errors at all, and then there’s the arrangements of some of the songs artists may pick out of the air. Rag’n’Bone Man for instance, we performed his single called ‘Human’ but he also wanted to play a track called Reach Out I’ll be there. I really wanted to get as close to the sound of the bass line played on the original by the fantastic Motown bassist James Jamison. I had to change the key which meant I either had to play it higher up the fingerboard or much lower down from the original key, and I was in a dilemma as to what to do so I played it much lower down. I actually played a six string bass on the show, I needed that low B string to get those notes and I had several basses to choose from. My style of playing has changed over the years, I play with a pick a lot these days, hence, I’m enjoying playing a lot of my basses so much more than I did when I just used my fingers.”

When Dave says …”a lot of his basses” he means just that…I know, I’ve seen them.

“Well, at the moment as I mentioned, I only have one double bass that’s too fragile to tour with so I have a few stick basses and about 80 plus others which include a lot of high quality models, Fedora and Sadowsky for example and the amazing Dutch luthier called Nikola Adamovic who has made a custom 6 string bass to my specifications. I believe Nikola is going to launch this as my own signature model. These of course cost a lot of money and ideal if you want a bespoke bass, but I am an official endorsee of Ibanez basses simply for that fact that if you want a commercially available bass that sounds and plays wonderful, then I would highly recommend Ibanez.

My biggest regret with Ibanez is that I wished I had discovered them sooner, they’re so playable, sound incredible and are affordable, even the early ones. I bought an Ibanez Musician Series bass from the 80’s, which was used around that decade by the likes of U2 bassist Adam Clayton and Sting. I have about 35 Ibanez basses at the moment. I had a picture taken with an Ibanez and with Jools for the front cover of Bass Guitar magazine. I’m currently using three of their 6 string models, including one with fan frets and their latest 7string Ashula SRAS7 which has a split fingerboard where the lower three strings are over a fretless section of purple heart tonewood and the top four over fretted rosewood. The versatility of this bass is awesome, this is what I like about this brand, they’re always pushing the boundaries to new levels.

I’m also excited about my Phil Jones Double Four 70 watt combo installed with just a pair of 4in speakers. I’m using this along with a stick bass for the Boisdale club gigs in and around London. It’s ideal to just jump on a train with and for me, has just changed the whole concept of travelling light with bass gear. The sound and tone from such a small unit is quite remarkable.

When I’m touring with Jools, I use an Aguilar DB751 Head and a DB410 cab, I drastically reduced my on stage volume as it was becoming problematical, I was ok with that but it started to go down and down until I couldn’t really hear or feel the bass. So I decided to use in-ear monitoring by Ultimate Ears, the clarity and separation was exquisite, but although I could hear the bass, it was like I was in a different county. So I decided to try a Porter and Davis KT Platform which acts like a sub woofer with the bass notes vibrating under my feet. With the in-ears and the platform I now have the ultimate sonic combination.”

So it’s full on for as far as you can see into the future, any plans or news that we need to know about? “Yes, it’s all go at the moment, Jools’s new BBC Radio 2 show starts a new series this week and the first guest is American record producer and musician Tony Visconti. I had that call again, although this time I’m told Tony wants to play my bass rig, so I’m actually in the band’s brass section playing trombone. So it’s all gone full circle, all this with future tours up ahead and freelance work I’m pretty well up to my neck……oh yes, some news, I’ve just become a dad with my Partner Lucy, how cool is that?”