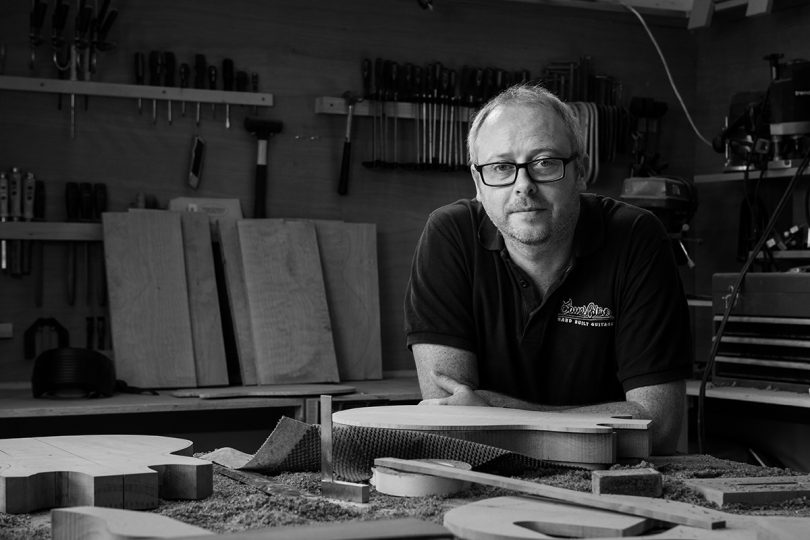 I’ve interviewed scores of custom guitar makers from all over the world and often had my hands on what I personally would regard as the perfect electric guitar. Fascinating as it may be, on asking if they have reached their goal, many luthiers have said that guitar making is based on endless innovation and improvement. ‘To make the perfect guitar will take forever.’

James Collins is a self confessed tonehead, heavily into exotic tonewoods, supreme craftsmanship, the finest hardware and in my book, produces a guitar close to perfection.

“I think it all began when my Les Paul was seriously damaged and three shops couldn’t handle the repair”, says James. “I’d been setting up guitars for friends and working on small fret work, but this repair was out of my league. A friend suggested I should get out there and learn how to do it myself. My day job working at a vinyl record company was going downhill fast as digital was taking over, so I decided to give it some serious thought………my next move was life changing.

I met Todd Money the manager at the Gibson Restoration and Repair Centre, we got around to talking about guitar repairs and I said I wanted to take this seriously. Todd recommended I should go to the Galloup School of Guitar Building and Repair in Big Rapids, Michigan, USA, so in 2007 I up’d and went.

It was a 10 week course, intense to say the least. We were all in the same accommodation living and breathing guitars. It was a real baptism of fire, immersed in the art of guitar building from 8am to 8pm. Apart from wood working, the course also included winding pickups, tap tuning and hardware. The last three weeks, we worked all day including weekends without breaks. It was a truly inspirational experience and I came home with an acoustic and electric guitar built to a high standard. The acoustic came out so well that I keep it here in the work shop as a bench mark for quality.

When I came back from Michigan, which I have to say is the coldest place on earth at minus 17 degrees in October, I decided to open my own repair centre called 12th Fret in 2008. I kept in touch with Todd and sent Gibson a warrantor’s application and became one of four official service centres for Gibson warranty repairs. Eighteen months after the Galloup experience, 12th Fret became and still are the only stand alone Gibson warrantors repairing minor finish issues, fret work and set ups.

The skills I learnt at Galloup along with thousands of bench repairs, set ups and guitar modifications at 12th Fret, became invaluable when I started to make my own James Collins Guitars here in Horam, East Sussex, in 2011. At the time, these were high quality custom Telecasters which had all the best upgrades and modifications that people were requesting from the repair side of the business.” There are currently four models in the new GT Series of James Collins guitars, the GT, GTA GTS and GTO all with the best components and hardware which are reflected within the playability, construction and tone. James continues,

“I thought, why install hardware that customers had asked me replace? So I’m only working with what I feel are the best choices throughout the guitar’s construction, this transcends within tonewoods, fret wire, hardware, the lot.

Quality capacitors and potentiometers make all the difference. I use Jenson capacitors and CTS pots which have more of a workable sweep, where the volume and tone response starts straight away rather than suddenly dropping off a cliff right at the end of the trip. All our guitars also have treble bleed circuits to keep the highs clear when the volume control is rolled off. Working this gentle taper with the slow sweep of the tone control can offer some very nice tones.

I’m installing Bare Knuckle pickups in our guitars, the Black Dog humbucker works remarkably well on our single pickup GTA. This model was inspired by the Gibson Les Paul Junior from the mid ‘50’s. I’ve had several through the 12th Fret repair shop including a ’55 and a ’57 and just love the simplicity about them. As we know, this was a budget guitar built for students. With just one fabulous pickup and a single volume and tone, you had to draw from limited components to get your tone, range and dynamics. Along with a sophisticated exotic tonewood construction, the GTA loaded with just one humbucker with coil tapping facilities, has a lot to offer.

The Black Dog and The Mule, are a great choice for the double humbucker loaded GT, GTS and GTO models. These are available with a 3 or 5 way rotary control which, like the tone and volume controls, are recessed into the body. With a 5 way rotary, 13 different sounds are on offer, including an articulate, airy archtop output akin to a Gibson ES 175 and 4 out- of phase settings.”

Always researching for the stellar tone, James is heavily into the physics of resonance and sustain within exotic tone woods, as he explains,

“All guitars in the GT Series feature the best exotic tonewoods, these include ebony, redwood, rosewood, walnut, maple, mahogany, cocobolo and ziricote, for a wide range of tonal options. I am also conscious about the weight of these woods. I have a magic number in grams I work to, and I can more or less decide where a piece of wood is going to be used in the construction just by handling it and how much to remove to achieve the optimum weight. Applying this to our GTO not only allows us to reduce the weight within a solid two-piece mahogany body, it also introduces a crescent shaped f-hole and also continues the theme of our trademark maple wave inlay featured on all models, running from the headstock through the fretboard. These gorgeous tonewoods are also so pleasing to look at, hence our models have natural finishes. The original concept I had in my mind was that if you want a red guitar, have one made in cocobolo or if you want a black one, we’ll build one from ebony.

The GT is a straight down the line model and with a stunning flame maple top, Honduras mahogany body and neck with rosewood fingerboard, is a trusted benchmark for our guitars. The maple cap flexes beautifully for a sweet high end, gorgeous midrange from the mahogany body and sustain from the rosewood fingerboard. It’s from here we can also tailor the customer’s requirements. A Walnut cap for example, will sonically round the corners off maple for a slightly more mellow top end, whilst cocobolo also has strong mid range properties, although not quite so reflective as maple.

Our single pickup GTA crafted with a one-piece Honduras mahogany body and book-matched ebony cap, mahogany neck and ebony fingerboard has a very interesting sound. Like maple, ebony also has reflecting properties and delivers a noticeably articulate high end, sustain and resonance, the latter of which are also enhanced by the stringer design in the back of the one piece mahogany necks. I first cut the necks in half, butterfly them and add the maple stringer with a central wood that matches the fretboard. Aesthetics aside, this also adds strength and increases sustain. The necks themselves are shaped with a spoke shave and modelled on classic profiles like the thicker ones akin to ’57, a medium from ’59 and thinner from the 60’s. Tapering the heel where the neck joins the body with a mortise and tenon joint, along with the double cutaway body shape, also offers easy access to the upper frets. I source a lot of exotic timbers from Tonetech Luthiers Supplies along with gold fret wire and specialist tools, but I’m always on the lookout for useable hardwoods. I actually made a GTA and a GTS recently both with book matched tops from a piece of English walnut I stumbled across, it took some imagination to visualise a guitar body was in there.

Most of the contours are shaped and guided by the hand and the eye. The most nerve racking of all, is carving the crescent f-hole in the GTO after I’ve already book matched the top.”

“In reality, 8-10 weeks are needed to finish a James Collins guitar, completing about four a month. Right now I’m working on a new guitar which will be the GTB, taking us up to 5 different models. This will be a flat top similar to the GTA but with two optional cap mounted humbuckers or P90 pickups and thru body stringing.

I recently had to make several models for the USA market to be shipped at the same time. I find this much easier, where I have to cut multiple necks and fretboards and matching headstock veneers to keep the continuity flowing.

There’s just myself, one full time employee and two apprentice guys who work one day a week. Part of the apprentice course I run here, is that they have to build a carved top GT from scratch. One guy is at college under a bench and hand joinery course which will give him a great foundation within the art of guitar making, whilst the other apprentice has already completed the Galloup course in the USA. He also came back with an acoustic he’d built and we’ve had several tone-offs between us.

For me, a good repairer is also a great builder. Now ten years on, that move was certainly life changing, there’s no looking or turning back on the Galloup experience.”