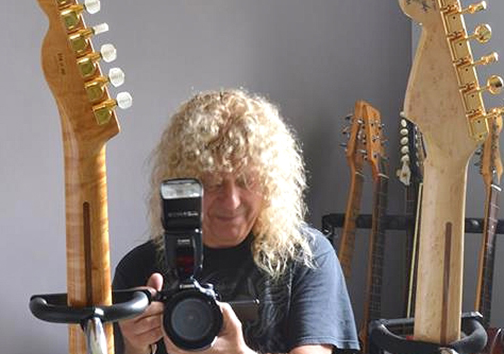 Although too young to be a hippy in the 60’s (and too old to be a Bay City Roller fan in the 70’s) the Mullen household was always rocking to the likes of The Beatles and The Stones, whilst the school guitar club had him unhappily noodling folk songs on the almost obligatory nylon strung classical guitar.

Witnessing The Beatles perform at Exeter’s ABC cinema on the 28th March 1963 and learning the chord of A was the turning point. The inevitable electric guitar followed, a Kent solid body and varnished TV cabinet amp with screw-in legs. Predictably a school band followed at the age of 12, which at that time around the mid 60’s was almost mandatory, if you had a guitar then you were pretty cool and if you could play you were top dog.

Often seen geared up in biker’s leathers but on his Series 3 Lambretta LI 150, or indeed in a Parker coat astride his Yamaha RD250, Mr Mullen was indeed a confused teenager. As rhythm player and vocalist in cover band ‘Howitzer’ (long hair fringed jackets) one of the local bands ‘does well’ they gained the support slot at Torquay town hall opening up for top acts of the time including Rory Gallagher, Edgar Broughton, Eric Clapton, Free and Slade to name just a few.

Touring professionally in 2000 witnessed a hard slog all over the UK and into Europe for 9 years in Status Quo tribute band Status Clone. If you want to get him angry, just say ‘Quo stuff is easy, it’s three chords!’

Often seen at trade shows in the UK, Europe and the USA draped in camera equipment, Lars pursued his role as a freelance writer and photographer for trade and end-user magazines in the music business, reviewing band related products, interviewing artists and enjoying the waft of new lacquer at many a guitar factory visit around the world.

Lars has photographed tens of thousands of guitars for his monthly guitar collection articles whilst continuing to build a reputation for promoting bands and handling press work for music business related products within his successful company Music Media Announcements.