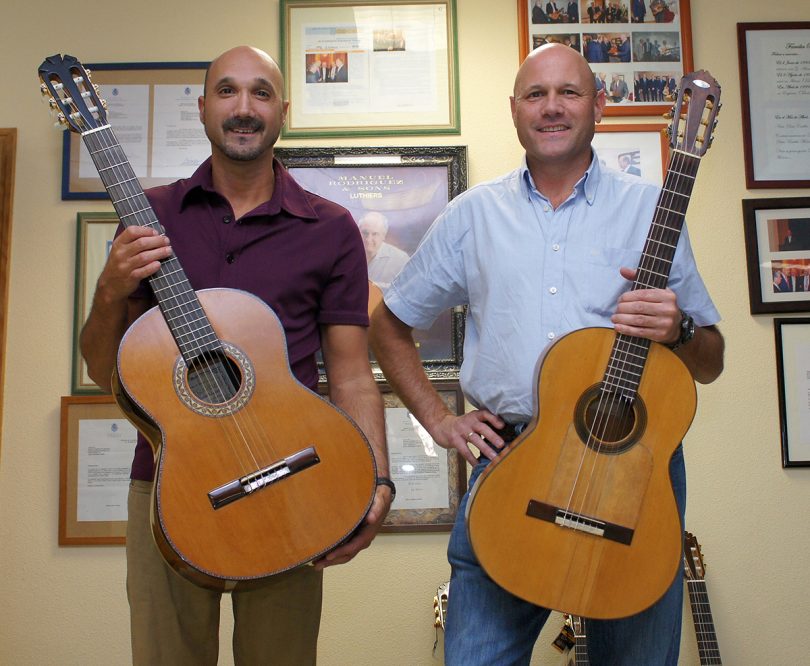 Based in Esquivias in the province of Toledo, 26 miles south of Madrid in Spain, Guitarras Manuel Rodriguez and Sons is the second oldest company in the world of classical guitars.

As a family run business with roots harkening back 111 years, and now in its third generation, Guitarras Manuel Rodriguez and Sons is steeped in history.

It was Manuel Rodriguez Pérez who decided to seriously build acoustic guitars after his fishing business failed when a German warship sank it off the coast of Cadiz. It would seem that local folk rejected the fish he caught fearing they would be feeding on drowned sailors.

During his years as a fisherman, Manuel Rodriguez Pérez had enjoyed dabbling with guitar-making as a hobby, earning a name for himself amongst close friends as a competent guitar luthier, whilst along the way, acquiring vast quantities of coffee boxes made from rosewood to construct his guitars.

The next paragraph will have the jaws of the ‘tonewood heads’ among us on the floor.

They made (and still do) a lot of coffee in Brazil, hence, as a result, Manuel Rodriguez Pérez had accumulated a horde of what has been one of the favourite tonewoods for luthiers and guitarists for centuries….Brazilian Rosewood.

“It’s hard to imagine today how such a beautiful tonewood like Brazilian rosewood was available in plentiful supplies when my Grandfather started this business back in 1905, selling guitars for a couple of Euros that took 5 weeks to build.

We are lucky here at the factory as we have excellent stocks of legally harvested, fully certified matured timbers, many of which are seasoned from as far back as the 1930’s. Some of the exotic woods like ebony destined for fingerboards is extremely dry and well over 100 years old. We dry out some of the younger woods by opening the pores with water sprinklers so we can dry deep inside the grain to 3% humidity, whilst remaining in the kiln at a constant 80 degrees, a procedure that’s monitored by a computer probe. The harder woods like ebony can take up to three months to dry whereas the softer woods like mahogany may only take a month. This is all a delicate procedure to which we pay a lot of attention, as it plays a major role within the construction and of course, the final tone of the finished instrument.”

Whilst music has followed trends and fashions over the decades with guitars often built to suit, genuine nylon strung classical style acoustic guitars have never really veered from their traditions within construction and looks.

Rodriguez Jr. is adamant that the ‘Spanish way’ is still the only way to make a classical guitar utilising many of the traditional methods used from the turn of the century and passed down through the generations.

These are still applied by highly skilful workers who sit for hours on end manually sanding, gluing and polishing. For example, string is still used to tighten the bindings to the body,  and all individual body purfling, rosette designs are cut and fitted by hand, as are the frets.

We all love our tone woods, their characteristics of smell, touch, sound and appearance, but we are aware of so many forests in some tropical regions of South and Central America, Africa and Asia that have declined to such a point that they cannot meet the demand of the more popular tone woods like rosewood and ebony.”

A subject that’s close to Manuel Jr.’s heart as he is conscious of the conservation of our planet.

“We have to think green for our planet and future generations; this is something I’m passionate about.

We are registered with the Forest Stewardship Council which ensures a new tree is planted each time one is cut down. A lot of our cliental recognise that we are in an age where we are destroying far too many forests; I actually have customers now asking me to make them a guitar made from European woods rather than wood from a rain forest.

This is indeed a hot part of the world with a lot of sun, so I thought let’s put that to use. Hence I have solar panels installed over a large area of the plant roof which in turn power some of the machinery and the heating system in the winter. This is a dry country with a lot of dust in the air so we have to have machines working hard to keep the air pure to ensure a clinically spotless spray area.”

Many insisted that to play authentic Spanish or Flamenco guitar you needed to be a gypsy or very poor. This was a time when original flamenco dancing was only accompanied by singing and the clapping of hands, whilst the addition of the flamenco guitar with its bright, almost fragile sound within modern flamenco dancing was introduced not only to augment this addictive musical style, but to emulate the rhythmic hand clapping.

“I have gypsy blood in me says Manuel Jr., and we still build guitars here with a passion and from the heart, which includes our line of flamenco guitars.”

Connoisseurs of this playing style will no doubt be aware, the use of Italian Cypress wood is the first choice for the tops. Its sonic characteristics naturally enhance the typical sharp and brittle sound amongst the trebles as an alternative to the warmer spruce and cedar tops featured on classical guitars.

Since these trees have become a protected species and can no longer be felled, luthiers have sought an alternative to Italian Cypress wood for flamenco acoustics.
Guitarras Manuel Rodriguez and Sons need not worry, a branch or two from Spanish Royalty is to hand.
Rodriguez Jr. explains,

“Fortunately, the gardens at the Royal Palace of Aranjuez here in Spain, where the concierto of Aranjuez from Joaquin Rodrigo was born, are lined with Italian Cypress trees, and we are summoned for collection when one has sadly fallen during a storm.”

Times may have changed but whilst Guitarras Manuel Rodriguez and Sons have installed CNC machines to stay competitive within such a niche market, over 80% of their guitars are still totally hand built.

Jr. continues, “During the Spanish civil war in the 1930’s there was very little machinery available for guitar building so we had to use extremely sharp hand tools. There are many tasks machines cannot undertake, like scalloping the braces for example, which are still performed by hand.

The workshop was a dangerous place back then, if you see an elderly gentleman sipping a fine wine outside a cafe forecourt here with a missing finger or two, there’s a good chance he worked in our factory.”