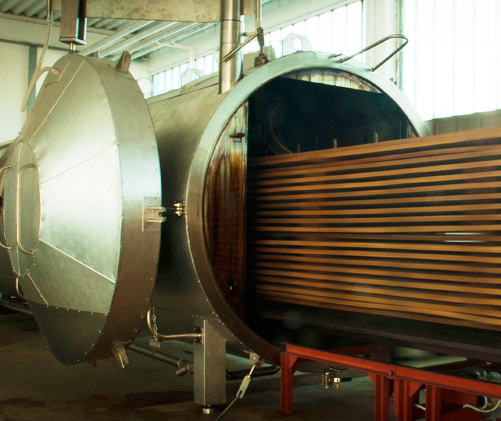 Research carried out in Finland in the 1990s investigated the impact of thermal treatments on the integrity of the wood, with special focus on Luthier Woods.

This research is now being further developed in Germany at the Eberswalde University for Sustainable Development.

The lecture at the EGB Symposium on Oct 7th 2016 examined the correct thermal treatment of timber and the impact of current commercial thermal treatments.  An overview of the findings is presented below.

In the Luthierie world we have heard about Roasted Maple, Caramelised Maple and other such products. These all involve heating the wood to very high temperatures, often in excess of 180 Degrees Celsius.  Investigations at the Eberswalde confirmed the earlier findings of Rauno Nieminen in Finland, that these high temperatures destroy the cellular integrity of the wood structure.  The treatment makes the wood brittle and less resilient to the demands of musical instruments.

Professor Pfriem who is leading the Everswald research explained this issue.  Wood is made of Cellulose, Hemi-cellulose and Rosin.  For construction timbers the main issue is degradation by either insect or fungi infestations.  These infestations rely on the Hemi-cellulose as a food source and it is the consumption of the hemi-cellulose by the infestations that weakens the wood.  High Temperature Thermal treatment transforms the Hemi-cellulose into a form that is no longer attractive to insects and fungi thereby “preserving” the timber.

For Instrument making, the Hemi-cellulose brings positive benefits to the tonal qualities of the wood.  Instruments are not exposed to conditions where insect or fungi are a problem.

A number of the Luthiers at the symposium reported that instruments that have “Roasted Maple” fingerboards are almost impossible to re-fret.  The wood is so brittle that removing the frets causes lots of “chip out”.

Rauno Nieminen’s research looked at alternative thermal treatments.  The objective was to try to replicate the natural aging of timber in a shorter time frame.  Juha Ruokangas, Finish guitar maker, worked with Rauno to test the treated woods on real guitars.

Their research concluded that the wood should be heated at lower temperatures, up to 140 degrees Celsius, in a steam atmosphere.  This process will “treat” the wood without destroying the cellular composition, thereby retaining or improving the tonal qualities of the wood.  Professor Pfriems research backed up these claims as his studies on the chemical change in the wood shows that under these conditions the cellulose, hemi-cellulose, and Rosin structures are undamaged.

The experts all agree that you can’t make good tonewood from bad tonewood by using thermal treatment, but you can improve the stability of good tonewood.

The research in Germany is ongoing and Tonetech has requested an opportunity to be involved.  Who knows, we may invest in the Thermal Treatment Equipment?